Several ordinary and plenary sessions focused on the concepts of law, reason, equity, restitution, slavery and just war that underlay and articulate the juridical thinking of Vitoria, Molina, Sandoval and De Moirans, among many other scholastic jurists and theologians.

Plenary speakers, such as Jörg Tellkamp (Metropolitan Autonomous University, Mexico City) and Jacob Schmutz (Paris, Sorbonne University) addressed fundamental issues for the history of legal thought. Tellkamp spoke about the evolution of rights in Iberian and colonial scholasticism, considering the interplay between moral conscience and the regulation of dominium as a key element in their understanding. Schmutz considered the Jesuits’ proto-anthropological descriptions of the peoples who were being Christianised in Portuguese South-America, the so-called Brasilienses, as a systematic attempt to construct an individualised approach to evangelism. According to his interpretation, a specifically Brazilian – and decidedly not Spanish – legal framework regulating the conquest and domination of the natives was founded on a theological perspective that regarded Brasilienses as “the most gentile [read: pagan] nation on Earth”. The missionaries described the indigenous peoples as a religiously and socially blank slate, supposedly ignorant of the existence of God, of the principles of natural law and lacking even the capacity of self-reflection. This scorning and degrading attitude towards the Brasilienses, however, gave them an exculpated and privileged theological and canonical status. Schmutz cited canonists and theologians like Manuel de Nóbrega, Luis de Molina and António Vieira.

The Salamanca project team also participated at the congress. The director Matthias Lutz-Bachmann had proposed a special session on The Men of the New World in the Works of the Salamanca Jurists and Theologians. In it, Christiane Birr and José Luis Egío from the project team were joined by Marco Toste, who is currently a research fellow at the SFB 1095 Schwächediskurse und Ressourcenregime, Teilprojekt A04 Potestas, Iurisdictio und Dominium: Schwäche- und Gewaltendiskurse im 13. und 14. Jahrhundert at the Goethe University Frankfurt. 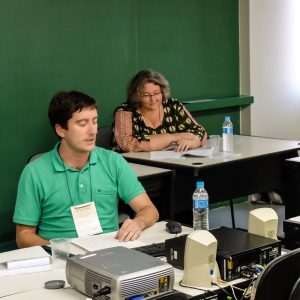 José Luis Egío retraced the first steps of a debate dating back at least to the first half of 15th century in order to show trace the problematic evolution of how Salamanca theologians and jurists reflected on infidelity and dominium. During the first European expansion into Atlantic Africa, jurists and theologians in Castile, Portugal and at the Roman Curia wrote important texts on difficult questions that would become one of the main concerns of Francisco de Vitoria’s thinking a century later.

Christiane Birr took on a juridical precursor of the School of Salamanca, the Castilian crown jurist Juan López de Palacios Rubios. His treatise on de insulis oceanis quas vulgus indias appelat, only recently published in an annotated edition, treats questions of Indian private and political dominium and of Spanish dominium et iurisdictio in the Americas in great juridical detail. The volume makes ample use of antique and medieval examples and normativity, trying to apply those European experiences as seamlessly as possible to New-World scenarios.

Marco Toste closed the session with developments in the classic typology of theological ignorance in Aquinas’ Summa Theologiae (q. 76 of the Ia-IIae). In the Salamancan commentaries to q. 76, the role of invincible ignorance became far more prominent than in Aquinas himself. Indeed, the ignorancia invincibilis preoccupied the commentators when treating q. 76, which itself became one of the questions treated at greatest length. As Toste pointed out, this shift in importance was due to the new challenge of how to treat the indigenous peoples of the Americas.

The papers presented at the XIV International Congress of the SIEPM will serve as a starting point for drafting and discussing some key entries in the Dictionary of the Juridical-Political Language of the School of Salamanca (e.g. ignorantia, infidelitas, dominium, iurisdictio, potestas …).

All three papers are slated for publication in the journal of the Max Planck Institute for European Legal History, Rechtsgeschichte – Legal History 26 (2018).