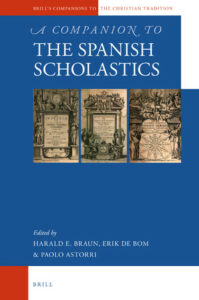 Here, the aspects mentioned above are treated and related to the subsequent developments of international legal doctrine, from their more immediate reception in the early modern natural law tradition, their deployment in apologies of imperialism to their becoming fashionable in the early days of the twentieth century and to today’s attempts to rethink a global law.

The volume has many other interesting contributions on contexts, Theology, Philosophy, Ethics, Politics, Law, Economics, and Sciences of the Spanish Scholastics. The more general chapters on “Contexts” also feature another contribution of a Salamanca Project member: Thomas Duve on “Law”.