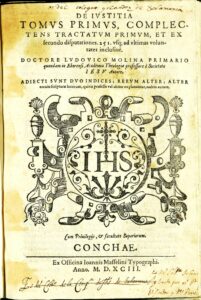 On Wednesday, May 11, 14.30, we invite all interested researchers to the next Salamanca Colloquium which will focus on “Luis de Molina on African Slavery“.

Jörg Tellkamp (UAM, Mexico City), together with Daniel Schwartz (The Hebrew University of Jerusalem): “Luis de Molina on slaves as subjects of rights”

Luis de Molina (1535-1600) is one of the most prominent authors of the School of Salamanca. Especially remarkable are his extended writings on the topic of slavery and the European trade of African slaves. The interest of historians in Molina has led to his writings being translated from their original Latin into modern languages. Currently, Anne-Charlotte Martineau and Jörg A. Tellkamp (together with Daniel Schwartz from The Hebrew University of Jerusalem), work on translations of Molina’s Disputations on the slavery of Africans into French respectively English.