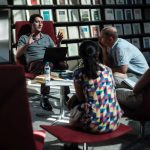 The project “The School of Salamanca. A Digital Collection of Sources and a Dictionary of its Juridical-Political Language” invites applications for its second Reading Course: