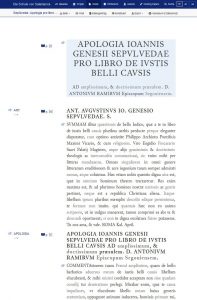 After Bartolomé de las Casas, his adversary in the Valladolid debate, the humanist and historian of Charles V, Juan Ginés de Sepúlveda, is now also represented in the Digital Collection of Sources: with his «Apología pro libro de iustis belli causis» (1552). 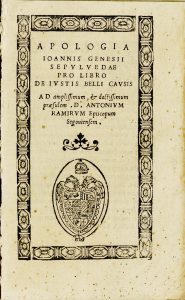 The «Book on the Just Causes of War» referred to in the title is Sepúlveda’s «Democrates Alter», a treatise presented in dialogue form on the justification of the Spanish right of conquest in America, which was not allowed to be printed primarily because of harsh criticism and prominent negative opinions from the universities of Salamanca and Alcalá. Only the «Apología» made it into print and thus remained the only printed source for Sepúlveda’s colonial political ideas until the early 20th century.